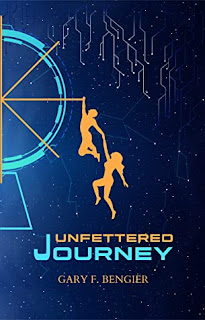 Unfettered Journey by Gary F Bengier written in 2020 is comparable to what 1984 by George Orwell was back in 1949.

Joe is a wonderful scientist who works mostly with Artificial Intelligence. His main goal is to create not just a sentient robot but fully conscious intelligent life. This lofty goal requires him to dive deep into not only what makes up human consciousness but also physics, especially regarding the universe. His project prompts him to take a sabbatical at another college to pursue these studies.

It is on his way back to his temporary home that Joe runs into Evie in a stream running though campus. Against his better judgment Joe offers her a place to hide from the police that are looking for anyone involved in a protest against the levels act on campus. Little dose he know but Evie is not only a member of the resistance against the levels act but a leader of the group. Much to his surprise Joe finds himself in a world of inequality that he never quite noticed before, but that he is ready to fight alongside Evie to change even if it could mean being rejected from society.

So much of this book was enjoyable. There was amazing moments of personal growth for Joe, and Evie’s growth was just as amazing though a bit more subtle. Then there was the ongoing fight aginst the government for equality among all the citizens no matter where they started out in life. Finally Joe and Evie discovering their peace and strength in nature was perfect for a lack of a better way to put it. The entire book is a bit scientific and technical which made it into a long read. Thankfully readers don’t have to fully understand the scientific theories to enjoy the book. Also there is a glossary in the back where readers can brush up on the main points.

The depth of this book alone make it ideal for adults, however young adults and teens are able to read it as well. It is a slow read and one that is going to take multiple reads to get the full benefit from it, especially if you are interested in the scientific aspect of the book. I rate this book 4 out of 4. The scope of people that this book can appeal to is a major bonus. No matter if a reader can understand physics or not there is still a rich story to discover in these pages. It is clear that the book was exceptionally well thought out and written with care.

A Deadly Education by Naomi Novik was given eighth place in the Goodreads choice awards for fantasy last year and has been nominated again... 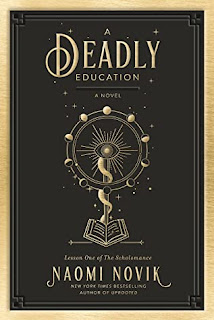 Search for a Review